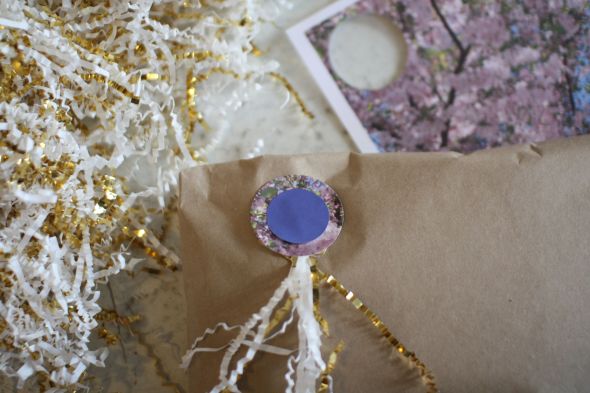 This is a simple wrapping idea I used recently for my best friend Eko’s birthday. One of the only good things about living on the opposite side of the world to your best friend is being able to send them nicely wrapped packages!

Eko and I both take birthdays pretty seriously and always like to number our presents to each other to indicate the order in which they should be opened. This time I decided to incorporate that idea into my wrapping by creating something similar to place ribbons (1st, 2nd, 3rd etc). I had some fun gold and white shredded paper leftover from a package I’d received, so for each present I took a small bundle of that and lined up the strips so they were even at one end, then taped that end down to the parcel. The circular part of the place ribbon is made up of two circles, one slightly smaller than the other. For the larger one, I printed out a photo of cherry blossoms onto card and then used a 1 3/4″ hole punch to punch circles out of this (you could also just trace around a circular object and cut it out), which I then glued on top of the taped part of the shredded paper. For the smaller circle I used plain blue sticky dots that I had on hand, but you could also use a different plain or patterned paper cut to a smaller size. I numbered the ribbons by hand but they would also look nice stamped with number stamps! For a matching card, I used the shredded paper and cherry blossom card again but didn’t add the smaller numbered circle.

There are lots of different variations on this idea that could be pretty and it’s a great one to use up whatever supplies you have on hand!

27 Jul This entry was published on July 27, 2015 at 7:44 pm. It’s filed under wrap and tagged birthday, gifts, place ribbons, present, wrap, wrapping. Bookmark the permalink. Follow any comments here with the RSS feed for this post.